They said they wanted tolerance. But really they didn’t want to stop at tolerance. They then said they wanted acceptance. But really that wasn’t all they wanted. They want approval, yet they know they cannot have it from bible believing Christians, so they rock up and show just how intolerant they are. They do not accept that Christians should have a right to disagree with their lifestyle choice. They do not “approve” of Christians. Yet they demand, vociferously, our approval or our downfall. This will not improve.

Protesters have crashed the grand opening of a Chick-fil-A restaurant in Toronto on Friday and shamed customers who are purchasing food from the new store.

The American food chain, which opened a new store at Yonge and Bloor streets a few minutes ahead of schedule this morning, is being slammed by protesters for its ties to anti-LGBTQ groups.

The CEO of Chick-fil-A, Dan Cathy, has previously said he believes in the “biblical definition of a family unit” and has donated millions to charities with a history of discrimination against LGBTQ groups.

Members of The 519, a city organization that is dedicated to advocacy for the inclusion of the LGBTQ community, joined LiberationTO outside the Chick-fil-A store to protest.

“Shame, shame, shame,” one protester yelled at a customer leaving the store this morning.

Here are a couple of images from the article:

United against hate of all but Christians, basically. These people are not against hate, they are bringers of hate – they are hating on Christians who do not hate them.

A Christian rock star has abandoned her dream of becoming an Anglican priest because as a gay woman she cannot accept the church’s teaching that homosexuality is ‘sinful’.

Vicky Beeching, 38, revealed she has now ‘let go of her dream’ to become a priest after bishops allegedly warned her she would need to become celibate if she wanted to continue her training. […]

‘I can’t say I believe same-sex relationships and marriage are sinful,’ she told the Sunday Times.

‘I have decided it will take too long for the church to change on this. I can’t move into that role with the infighting, the disciplinary measures going on for LGBT clergy who step outside the lines.’ […]

But Beeching said she hopes the church will eventually change its teaching on the subject.

Now, if you’ve never heard of Vicky Beeching, you’re not alone, I haven’t either. However she is in the national news talking about how the church will change eventually – she won’t change, and she doesn’t seem willing to even acknowledge her sin, let alone call on God to change her.

We are ALL sinners – we can refrain from sin ONLY with help from God! We are absolutely vulnerable to those sins, specifically, which we don’t acknowledge as sin, because we are unprotected, and satan knows it. Sin is defined as “transgression of the law” in 1 John 3:4.

While the church tells her she must be celibate, her desire for sex prevents her fulfilling what she believes is her calling. Just as we would hope that the C of E wouldn’t ordain a witch as priest, we must also resist having other kinds of unrepentant sinners lead us!

This comment from that article seems very appropriate: [emphasis added]

Anglicanism has bent to every liberal wind and still hasn’t held its congregation… the restrictions on sexual behaviour are not written by any denomination so cannot be altered by any to suit the times …… take it up with God who is above any archbishop.. no church can validate what God has prohibited, nomatter how popular a particular idea becomes it cannot be de classified as no longer sinful in the teachings of God, simply by popular vote….. e.g. abortion, divorce, homosexuality normalisation, euthanasia…. tough but true… human nature has to submit to the Word of God… it cannot pick and choose according to popular demand

I hope that Vicky will find a way to BELIEVE God, and not just believe IN Him. 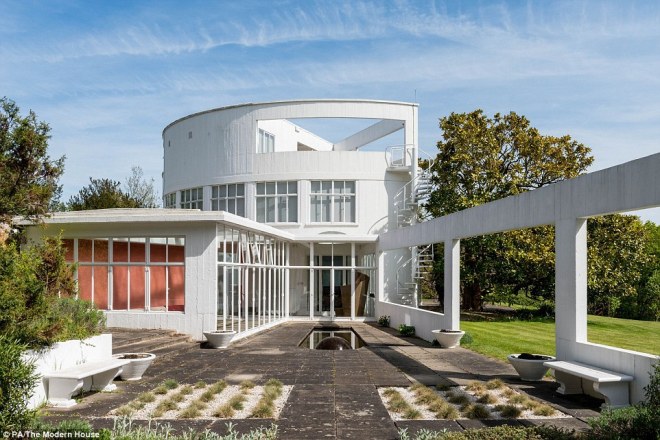 This beautiful building, which has featured in the TV drama ‘Poirot’ has a secret homosexual history (which we must now have forced down our throats). I quote:

A unique and sprawling mansion built ‘in response to homophobia’ has been awarded Grade-II listed status as part of a project recognising Britain’s ‘queer history’.

St Ann’s Court in Surrey was once home to the stockbroker Gerald Schlesinger and celebrated landscape architect Christopher Tunnard.

The property was masterfully designed so that the couple’s bedroom could be split into two separate rooms – enabling them to keep their relationship a secret at a time when homosexuality was a criminal offence. […]

Historic England has listed, upgraded or updated listings for six locations across England which are of Lesbian, Gay, Bisexual, Transgender and Queer (LGBTQ) value.

Other locations include the grave of writer, musician and Egyptologist Amelia Edwards, the London home of Oscar Wilde and the house where Benjamin Britten lived with his partner, the tenor Peter Pears.

Historic England said this was part of a major initiative ‘to improve understanding and recognition of England’s diverse heritage, tackling under-recognition of the major influences and contributions of communities including LGBTQ, Black and Minority Ethnic Groups, disabled people and women in building the nation we live in.’ (source)

No, it’s called ramming it down our throats that even the history we cherished as ‘normal’ was in fact infested with homosexuals, thus justifying the dominance of their agenda today. Notable by their absence in the last sentence there were straight white men….

This is total reprobate filth. I have absolutely no further comment to make.

See also: A glimpse into the sewer, and a tribute to Mary Whitehouse

Because I am going to ask a simple question. Isn’t shoving a disliked behaviour in the face of those who dislike it, bullying?

I mean if you were asexual (meaning you did not enjoy sex or have a sex drive) you might feel uncomfortable witnessing any PDAs. You might cringe at the sight of any couple kissing. No-one would force you to witness this – no-one would turn up in your house or office and demand you look at the behviour. Unless they were gay. In fact the security guard who apparently threw a gay couple out of Sainsbury’s for holding hands did so because someone complained. The complainer is probably in the minority. They’re probably not asexual, but they’re someone who finds gay men holding hands offensive. Just like I would prefer not to see cats screwing, he might prefer to not see gay men holding hands. He’s a minority. LGBT folks are bullying a fellow minority in a VERY public way.

I don’t hate gay people – I’ve had so many gay friends over the years. They were absolutely lovely and great fun. This isn’t about who you are as people. This is about using your ‘right’ to behave as you please as a battering ram to silence those who don’t like it. It’s actually diabolically insensitive. I quote from the article:

“The more we [LGBT people] hold hands, kiss, and show affection in public the more healthy we will be as a society,” he said. “People are only shocked because they have never seen two men together before. That’s how shock happens, it comes from fear.” (source)

Fear? I don’t think people are afraid of gay people.

However, I think a lot of people who don’t like to see sluts in their PJs in the local supermaket would be equally horrified to see a man in suspenders gyrating in a FOOD store!

This form of activism is a deeply offensive and bullying method of getting your own way. In fact the rule here seems to be that you’ll keep shoving it in our faces until we either like it, or shut up – what about that is not bullying? I’m sorry but it is.

This is Hagmann and Hagmann at their best – a great interview, and a lot of really excellent information. Don’t miss a minute of this.