I think this game of conkers has gone far enough. Unfortunately the elites who really control things are pulling his strings, and Trump has fallen for a lie. There was no chemical attack, but if they can produce a teensy bit of footage, the outrage will ignite Trumps fury and they can get on with their proxy war in Syria.

But why now? Yes, that’s a very good question? The reputation of Russia has been dragged through the mud ever since Trump took office (prior to that Obama was trying, but it wasn’t working). Every lie that has been spread about the Russians and their attempts to influence elections or whatever was all because of this Syrian conflict.

At this point Syria has almost completely won the war with Russia’s help, and so a false flag was needed to try to convince the public (? really? we don’t matter, perhaps to merely convince Trump et al) that Assad had decided to attack his own people right at the point where the war was won. The issue is that the United States cannot allow Assad to win this war, nor the Russians to help him to victory – every means, fair or foul, must be used to create a new military threat there, and allow ‘Murica to wade in with its size 10’s and made another bloody mess!

All of this will be laid at the feet of the next generation – a tax on all their future earnings. War is not cheap.

We see that Theresa May has decided not to leap into Syria “without evidence” however I suspect she may be persuaded (I pray not!).

All any of us can do at this point is to continue to SPEAK THE TRUTH to whoever will listen – people in the supermarket queue is necessary!

Some people are awake – these are the top two comments on the DM article linked above:

Not one of the top ten comments support this action.

I’m tired of banging this drum, but while I see injustice, I have to speak out about it. Again, I urge you to listen to and support the UK Column. This was their Monday show – they talked extensively about the “evidence” or lack of in Syria for this chemical attack amongst other things.

I pray that Assad and Putin will be protected and able to do their jobs. I pray for wisdom and clarity for Trump and May and the other puppets – let them not be used to form a third world war!

I wish I could believe our leaders – I wish I could trust in the honesty and integrity of every leader of the world – I wish we had the choice to elect honest me and women! Sadly we are offered puppets to elect – puppets whose strings are pulled by those who are unseen to the majority, and are considered a “conspiracy theory” by those who don’t want to believe it.

It is tragic. And it has consequences. It will be your sons and daughters who suffer both the real effects of war, and the less easily seen effects (national debt) for the rest of their lifetimes. Not one of the Western Nations can be said to be in any position to take on a war, yet they all are. Their leaders are hell-bent on controlling the middle east, and each one is supplying the side which will get the effect they want. This cartoon suns it up:

Russia has stepped in to protect Assad, a moderate leader who is beloved by his people. Therefore Russia is now the bogeyman. The media keep on pressing the case that Russia is behind every evil going on in the world from election hacking (haha!) to poisoning Russians living in Britain with “military grade nerve agents” which were ineffective.

In Syria the deep state is conducting a proxy war, and in the media the war is for our minds.

All for a pipeline. All for the house of Saud.

Today’s headline just shows a new phase in their desperation to get the public on side. It’s not working though as you will see!

And here are the top two comments. In fact there was not one in the top ten which showed that the public are buying these lies for a moment. Well done to those who are awake to the lies – no wonder the powers that be think they need to regulate the internet, we are clearly not believing their lies!

Assad is a good leader who can walk among his people in safety. He is a man of the people – a gentle optometrist by training! He is not the enemy of anyone except those with an agenda to reshape the middle east for profit. Who would want that? Those with vested interests in oil and land. Those who would happily think that lies, propaganda and the vile deaths of war are “worth it”. 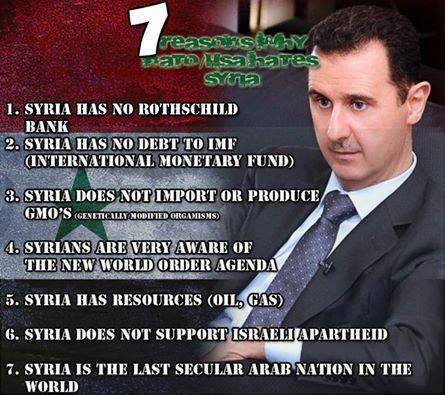 Let us all stand against war. It is not in our best interests, that’s for sure!

I am delighted to see this headline today! Now, if only the US and others with a desire to continue a proxy war to keep the Russian pipeline out of Europe, would just stop their machinations, peace will be not only fully restored, but on-going. I doubt that will happen, because I’ve never known the American government to put truth before lies when there’s oil at stake. I hope that in Trump you have a president in the US who is capable to conserving the US military for those things which are necessary. I hope that whoever is paying ISIS will now stop. Enough of the charade now – Putin is a success. God Bless Putin, and may Assad continue to lead his country, in which he is loved!

Oh this – now this, again, doesn’t surprise me – not at all, but it disgusts me. I think it’ll disgust you too. I’ve mentioned before the desire to “use our heartstrings to pull us down” (that phrase is from an article I quote in this post here: Link). Well what better way to convince the west that we must engage in military action in Syria? Let’s use the victims there now as propaganda weapons against the Assad regime.

I’m just going to give you an aside here for one moment. I recall before all this really got started, but there were murmerings about Syria and about the Assad regime in the press, Glenn Beck came out and said he couldn’t understand this because the Assad regime was loved by it’s people, and thoroughly benign. Within days he came out and said the opposite – what changed his mind? (perhap it relates to the alleged CIA infiltration of his organisation? That was talked about in this interesting interview relating to Libya (Link) – but I digress).

So let me give you an illustration which might make clear the reasons for war, and why the elites might want to dupe us into agreeing to join in:

So, now let me quote from 21stCenturyWire: (Link)

“After four and half years of relentless propaganda being flung around western mainstream media by propagandists, NGOs and Empire serving mouthpieces, one wonders how this stream of effluent still manages to stick to the consciences of the public it serves to deceive.

Yesterday, a Facebook post caught our attention. A Palestinian person based in Gaza posted two photos of child victims in Syria. The photos were accompanied by the caption, “The massacres of Assad regime in Syria #Douma”. The subsequent barrage of comments consisting of the usual plethora of outpouring against Syrian President Bashar al Assad and the Syrian Arab Army (SAA) provoked us to investigate further.

What we discovered was a highly organised, western-centric propaganda ring…

[…] Further investigation revealed that in reality, [photographer] Khaled Khatib works for and with the ‘White Helmets’ and his photos are used extensively by the well known EU-backed and UK-based, one man propaganda band, the Syrian Observatory for Human Rights. The SOHR is actually Mr Rami Abdul Rahman, who runs this propaganda feed from his house in Coventry, UK, and who bases the majority of his information on Skype calls to Syria. This information, however, is unilaterally used by the Axis of Interventionism [US, Europe in particular] to justify their proxy invasion of a sovereign nation and their clumsy, murderous 4 and half year-long attempt at the “regime change” of Syria’s elected government, engendering, in the process, the widespread loss of civilian life in Syria at the hands of their proxy armies. More than any other single information source, the SOHR’s propaganda dispatches are used to justify western policy of arming and supporting the multi-headed insurgency in Syria.

[…] The White Helmets are equally suspect. This is a quote from Rick Sterling’s excellent article on the “Highly Effective Manipulators”:

“White Helmets is the newly minted name for ‘Syrian Civil Defence.’ Despite the name, Syria Civil Defence was not created by Syrians nor does it serve Syria. Rather it was created by the UK and USA in 2013. Civilians from rebel controlled territory were paid to go to Turkey to receive some training in rescue operations. The program was managed by James Le Mesurier, a former British soldier and private contractor whose company is based in Dubai.”

“The trainees are said to be ‘nonpartisan’ but only work in rebel-controlled areas of Idlib (now controlled by Nusra/Al Queda) and Aleppo. […] “But White Helmets primary function is propaganda. White Helmets demonizes the Assad government and encourages direct foreign intervention. A White Helmet leader wrote a recent Washington Post editorial. White Helmets are also very active on social media with presence on Twitter, Facebook etc. According to their website, to contact White Helmets email The Syria Campaign which underscores the relationship.”

Now when you add to that the manipulation of the public through the use of falsley attributed images like these: 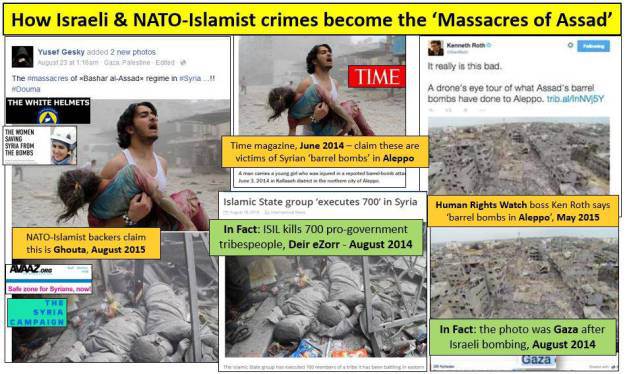 We’re being played. I believe that Syria is biblically significant – I believe that it is not a coincidence, nor mere greed on Rothschild’s part, that we have a powerful war going on right there.

We must say NO! We must resist war at all costs. We must refuse to send our sons and our daughters to fight and die for Rothschild. 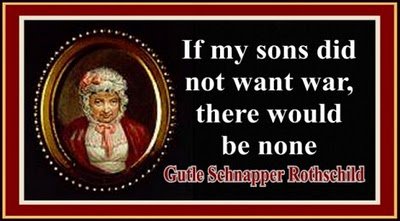 You can also read Albert Pike’s three world wars to see what their satanic plan is: Link

UPDATE: For the perfect propaganda piece to underscore this post, look no further that this: Link

Assad’s Strategy Is To Create Refugees
“They want to empty the country.”

“As long as Assad is in power and he continues to use these tactics, more and more refugees will be created.”