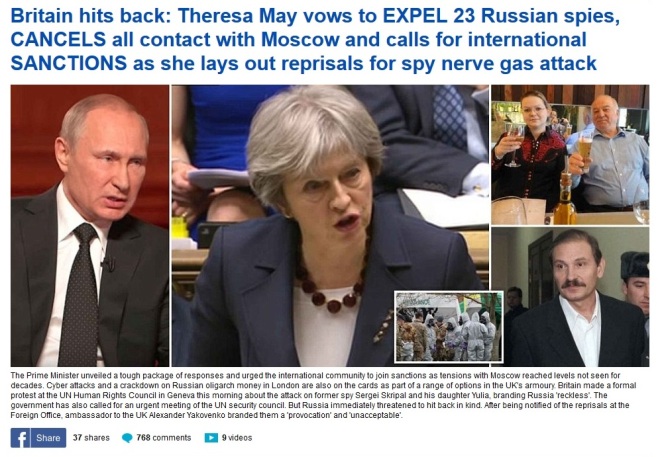 Silly Theresa May – she’s decided to try to bully a great big bear. I don’t think she’ll get very far – most likely she will be mauled at the minimum. Her posturing is pathetic, and her actions inflammatory. Such foolishness is unbecoming of a world class leader. Theresa May is proving that she is not a world class leader. Oh dear (all over again). (Link to the above article)

The Russian Embassy tweeted out the following yesterday after stating that the allegations were “evidence free”: (from this article: Link)

So why, Theresa, have you not complied? Is it because you want to paint Russia as the bad guys? Are you in effect trying to influence the coming Russian elections? You wouldn’t do a thing like that, would you?

Without a joint investigation, as prescribed by international law: 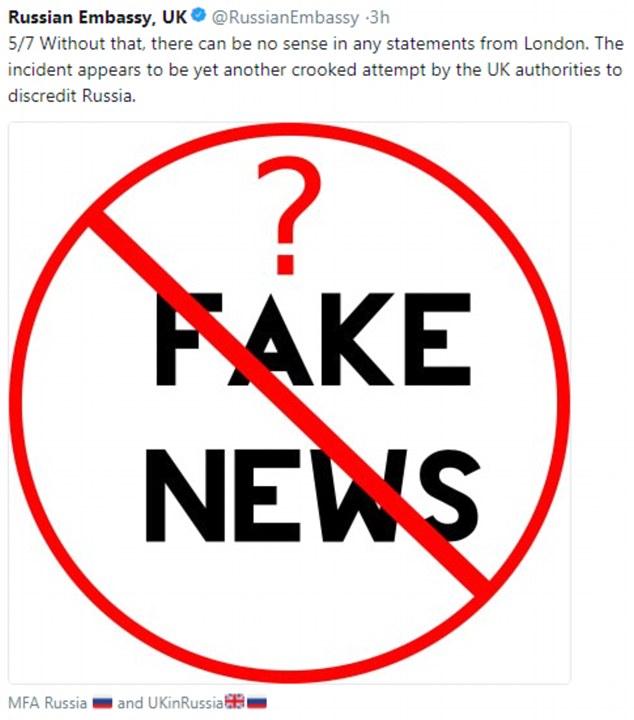 The propaganda continues. A few great comments appeared on that article though:

Some are concerned that Vlad will switch off the gas (no need, just hike the price, that’d do enough to put Theresa back in her place).

I quote from the top article:

In a dramatic escalation of the spat with Russia, Mrs May said: ’Under the Vienna Convention the United kingdom will now expel 23 Russian diplomats who have been identified as undeclared intelligence officers – they have just one week to leave.

‘This will be the single biggest expulsion in over 30 years and it reflects the fact this is not the first time that the Russian state has acted against our country.

‘Through these expulsions we will fundamentally degrade Russian intelligence capability in the UK for years to come. And if they seek to rebuild it we will prevent them from doing so.’

In an apparent reference to the activities of Russian oligarchs, Mrs May said there would be tighter checks on those coming to the country.

I have said before that the elites (Rothschild) are behind this shift in relations between our countries. Putin is very measured – in fact the more I pay attention to his actions the more I am awed by his calm and measured tone. Putin is a statesman, and May is merely a minion of the Rothschilds and their filthy cronies who want to both influence the Russian elections, and who want to create a (profitable) war that we have no money to fight, let alone manpower. A new cold war would suit the Rothschilds who are upset at the actions of Russia in creating gold-backed money! In fact don’t you think that in the derailment of the elite’s plans to get Hillary Clinton into office (cue: WWIII), they have changed tack and used another of their assets, Mrs May?

Anyway, what is clear is that the Russians are not our enemies – even if it were believable that their leadership were (which it is not). That would be like saying that you or I should be punished for the actions of Theresa May. It is people – ordinary people like you and me – who will suffer in this ghastly posturing and warmongering. Thankfully many appreciate the Russians! 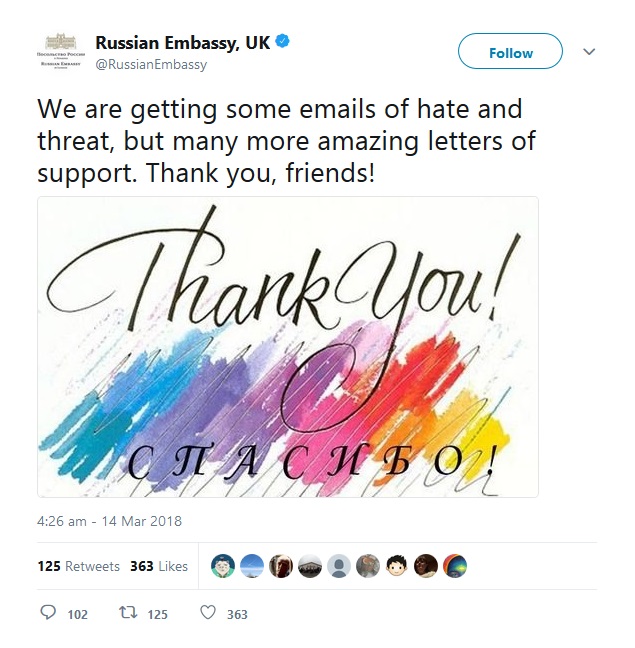 May God protect us all!