Ok, let me be gentle now – you might want to sit down, I’ve got some news.

The earth is flat.

Yes, I know it sounds impossible – we’ve been told it’s round, or as my dear Father used to say an ‘oblate spheroid’, but it’s not. It’s flat. Just like God told us in the bible. Flat.

I’m sorry – here have a strong cup of sweet tea, and here *profers a box of tissues*

One of the stages of grief is denial, so let me back up my news for you.

Which is worse, the feeling you’ve been lied to, or the fact that the lie is still the mainstream teaching of the day? I’m not sure. I can tell you that those in power know it’s flat:

See that? Yep that’s the flat earth map. Right there. Surrounded by Roman laurel leaves… but I digress….

Now you might be feeling a little uncomfortable at this point – I mean, so what? I mean the earth is a globe, right? Laying it out flat like that doesn’t make it flat – except if you look at flight paths, the earth is flat – as you’ll see:

That whole series is great by the way. Well worth your time to watch.

But NASA wouldn’t lie to us would they?

Here’s a quote about the guy who used to produce these for NASA: (source)

“Matthew Boylan, former NASA operational graphics manager, worked for years creating photo-realistic computer graphics for NASA. Now a vocal Flat-Earther, Boylan claims that NASA’s sole reason for existence is to propagandize the public and promote this false ball-Earth heliocentric worldview. Originally recruited because of his skills and reputation as a hyper-realist multi-media artist, he started doing projects like photoshopping various lighting and atmospheric effects onto images of Earth, the Moon, Jupiter, Europa, etc. Having proved himself, and wanting to promote him to do more classified work, a room of NASA higher-ups during a party, as a type of initiatory-rite, explained to him and a few others in detail the reality of the Geocentric Flat-Earth model and how they have fooled the entire world! Refusing to be a part of their deception, Boylan cut his ties to NASA, began researching the Flat-Earth for himself, and has recently become a powerful voice on the lecture circuit and the internet exposing NASA and their heliocentric hoax. In his comedic lectures he speaks candidly and eloquently about how simple it is using nothing more than Adobe Photoshop and a video editor to create any and every type of image NASA purports to be “receiving from the Hubble telescope.” He points out how in most ball-Earth videos lazy NASA graphics workers don’t even bother changing cloud structures in ordinary or time-lapse footage; the same shape, color and condition cloud cover often stays completely unchanged for 24 hour periods and longer! Boylan states unequivocally that every picture and video of the ball-Earth, all the Moon/Mars landings, the existence of orbiting satellites, space stations, and all Hubble images are hoaxed. He even quips anecdotes about how NASA officials and astro-nots privy to the Flat-Earth truth would laugh hysterically at the brain-washed zombie public who unquestioningly believe their televisions…” 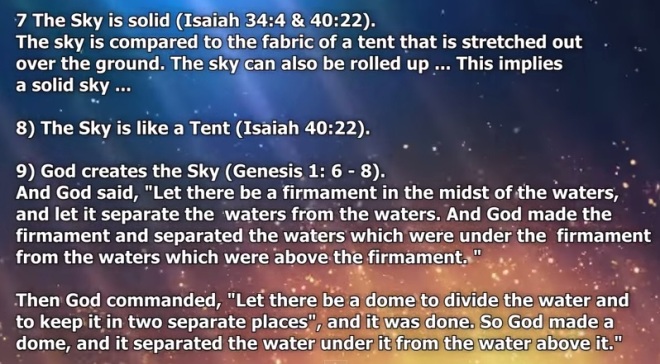 God gave you the truth, just as He did on the subject of evolution – be of joyful heart – you have the truth in your hands!

Now, you may think that I have gone too far with this post – you may think this is a fancy – but I have been studying it for a while, and I cannot refute the argument of earths flatness. If you can accept the possibility of evolution being nonsense, then this one shouldn’t be too much more of a leap. There’s lots of information out there on flat earth – read and watch and learn.

God Bless us all!

9 thoughts on “Things are not as they seem….”